Thatcher recorded 2 cemeteries for the family of William Swift. No signs of these cemeteries remain today.

In the first cemetery, he recorded "William Swift Fam. Cem. on Clay St. off. Mill St. Puddingshire, No. Midd." and said about it "small walled in yard containing 3 graves on land now owned by Robert W Thorson but formerly owned by William Swift, who is buried there." He only detailed the burial of Betsey Swift, daughter of William swift, who died in 1850.

The second cemetery should not have been included in Charles M. Thatcher's book. It is just an early version of the final record of the first cemetery.  Thatcher did not write the book that he is credited with authoring. The work includes a subtitle "A compilation of records by Charles M Thatcher in the late 1880s". The records were compiled during the early 1990s, and published in 1995. He was not alive to help the volunteers with his notes, and the volunteers did not look for the cemeteries that he recorded. Ninety-three years earlier, the burials were moved to Central Cemetery. 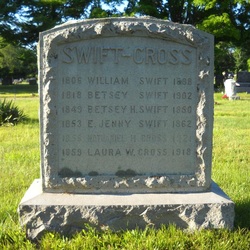 The Swift-Cross lot in Central Cemetery is located at Cypress Avenue, Lot 383. There is one large stone with the names of 6 people engraved onto the front. Nothing is engraved onto the back. Cemetery records indicate that William Swift and 2 children died in 1902. According to the date of the deed, the lot was purchased n February 12, 1902. Betsey Swift died on February 18, 1902. William Swift is recorded in grave 4. Betsey is recorded in grave 3. The two children (Betsey H Swift died in 1850 and E. Jenny Swift died in 1862.) are recorded as both in grave 8. Laura W. (Swift) Cross had purchased the plot. She moved the remains of her father and sisters. When her mother died, her family was all in one place. After she died, her husband, Nathaniel H Cross, was the last person interred within the plot.